As I am sure you are aware, there has never been more media or public attention about severe global weather and climate warming than now. It is within the context of this increased awareness that I wrote my second environmental book, Arctic Blue Deserts; particularly given these conversations I believe, are missing crucial and factual information.

The extent of Arctic Sea ice in August 2010 decreased by 800,000 square miles, as compared to 1980, and 10 years later in 2020, it decreased by approximately another 300,000 square miles. (National Snow and Ice Data Centre). Between 1979 and 2008, a gigantic increase in the absorption of solar energy was reported by Holli Riebeek, Editor NASA Goddard Space Flight Center, in Melting Snow and Ice Warm Northern Hemisphere:

“On average the Northern Hemisphere now absorbs about 100 PetaWatts (1 PetaWatt equals 1,000,000,000,000,000 watts) more solar energy because of change in snow and ice cover,” says Mark Flanner, Associate Professor, University of Michigan. “ To put it in perspective, 100 PetaWatts is seven- fold greater than all the energy humans use in a year. Changes in the extent and timing of snow cover account for about half of the change, while melting sea ice accounts for the other half.” (NASA Earth Observatory Website, May 19, 2011)

A June 15, 2021 NASA and NOAA Geophysical Research Letter, Satellite and Ocean Data Reveal Marked Increase in Earth’s Heating Rate, by Loeb.et.al, confirms there are other mechanisms (impact drivers) warming the earth’s surface. They are “decreased reflection of energy back into space by clouds and sea ice and increases in well-mixed greenhouse gases and water vapor.”

I maintain it is imperative we recognize the precarious shifting balance between the Arctic’s natural water cycle and its free-flowing rivers that have been radically altered in the past 60 years by Canada and Russia building 25 massive reservoir hydroelectric dams (heat sinks) on rivers flowing into Hudson Bay, Labrador Sea and the Arctic. 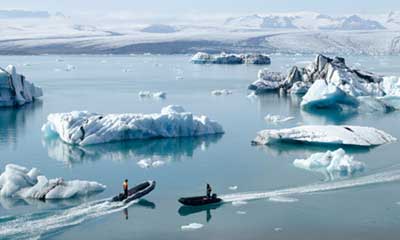 The war against climate change cannot be won by only reducing carbon emissions while ignoring the rapid melting of snow and sea ice in the Northern Hemisphere. This monumental reduction in the natural reflection of solar energy fuels a systematic and dangerous absorption increase of this solar energy, and the generation of mammoth amounts of water vapour from these open seas and mega reservoirs. This is happening in regions once dominated by snow, sea ice and glaciers, signaling a major climate catastrophe is underway.

The UN’s August 2021 Report failed to document how a world-wide reduction in carbon emissions will mitigate the massive heat absorption and water vapor generation by these human-made mechanisms.

Simply put, these mega dams have radically altered the Arctic and earth’s energy imbalance by diminishing the natural cooling mechanisms of snow, sea ice and glaciers, reflecting solar energy from the earth and back into space.

Scientists, politicians and industry leaders historically have never openly discussed these two heat- generating mechanisms decreasing snow and sea ice cover and increasing water vapor, directly linked with northern dams, or their cascading “domino effect.” Each year another 100-plus PetaWatts is absorbed, and the earth’s climate keeps warming and intensifying, especially in the northern latitudes.

There is still time to turn this energy imbalance around, by restoring the natural water cycle on these 10 northern rivers and their tributaries by removing these 25 mega dams and renewing our efforts to develop optional, sustainable energy sources.

In addition, while you are on my website now, you can read Chapter 10 of my book Arctic Blue Deserts which deals with Russia’s Kara Sea’s melting summer sea ice… an almost 100 percent reduction of sea ice over the past 40 years. Simply click on the tab- SAMPLE CHAPTER at the top of the page.

I encourage you to share this information with colleagues, family and friend, as we join our voices as part of this important environmental conversation.